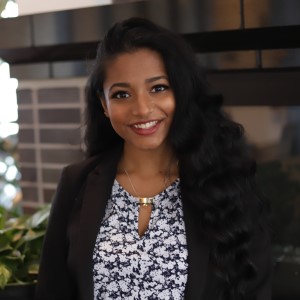 This award recipient is a Harry S. Truman Scholar in the Honors College and Douglass Residential College and is a member of Cap & Skull. They graduate this May with majors in Political Science and Middle Eastern Studies and a minor in Arabic. At Rutgers, they have pursued interests as President of Rutgers Petey Greene, which brings volunteers into prisons to tutor people who are incarcerated. In addition, they served as President of the Women’s Political Caucus, captain of the Mock Trial team, Editor-in-Chief of Rutgers Odyssey, RA of the DRC wing of the Honors College, Student Coordinator of RU Voting at Eagleton, Aresty Research Assistant, Diversity Peer Educator, and beyond. This past year, they were the only American selected for UN Women’s Beijing +25 Youth Taskforce, comprised of just 30 young changemakers and activists from around the world. An interview they did with “ABC” has been aired across the country, and they gave a speech to 20,000 young people at this year’s UN WE Day at Barclays Center. They worked as Microsoft’s youngest ever Microsoft Civic Tech Fellow during the summer after their first year of college. As a second-year, they were selected by the U.S. Department of State as a Critical Language Scholar and spent their summer in Amman, Jordan, for intensive Arabic language learning and cultural immersion. Their interest in Arabic stems from their desire to uplift marginalized populations globally, including refugees. Accordingly, they spent last year studying abroad in France where they interned with global humanitarian NGO, AMADE Mondiale, and volunteered with the Monagesque Red Cross in an Italian refugee camp. Last summer, they were a Public Policy and International Affairs Fellow on the Data Analytics Track at Carnegie Mellon University, and plan to spend the upcoming summer after graduation working with a public service/governmental organization in D.C. They are the 2019 Harry S. Truman Scholar of New Jersey and are committed to a career in public service. They have been accepted to the law schools of Yale, Stanford, Harvard, UChicago, and Columbia, and though they are not yet sure where they will matriculate this fall, they are excited to attend law school and then practice as a trial attorney in public defense or impact litigation. They also plan to run for federal office, and ultimately aspire to a diplomatic/foreign policy position in which they can fight for the human rights of all.