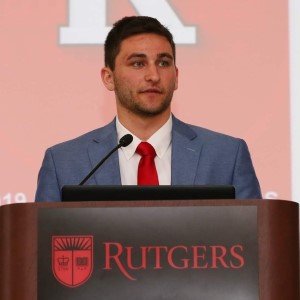 This award recipient is an exceptional student leader whose impact on the basketball team won’t be measured in minutes played or points scored, but rather will be measured by how much they are missed. They have the unique ability to connect with everyone on campus from peers, to professors, to the fans and donors who support the basketball program. They are a consummate team player who always demonstrates the highest level of sportsmanship and character, which is why it was so special that the coaching staff rewarded them with an athletic scholarship during their junior year. Basketball Coach Steve Pikiell praised them by saying, their “leadership was essential in building a culture based on unselfishness, inclusion and giving back to the community. The ability to relate to others and bring people together was a key factor to the development of our fantastic team chemistry that was evident more and more each day.” In addition to their academic and athletic commitments, they understood their privilege and therefore embraced the importance of giving back to the community. In the summers of 2017 and 2018, they traveled to Honduras (2017) and Puerto Rico (2018) to benefit Soles4Souls, a global not-for-profit dedicated to fighting poverty. During their time as an undergraduate, they have read to school aged children during in Read Across America, have visited sick children and adults at local hospitals, and have volunteered time at Elijah’s Promise. For several years, they have been an active member of the Student-Athlete Advisory Committee (SAAC) including taking on the leadership role as President during the 2019-2020 academic year.